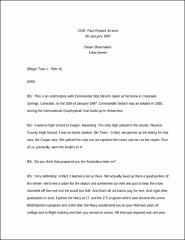 Commander Streich was an aviator in 1955 during the International Geophysical Year build-up in Antarctica. After summarizing his experiences in high school (Casper, Wyoming) he goes on to discuss his enlistment in the Navy Z-5 program. After receiving his wings, he was assigned to the Heavy Photographic Squadron. The squadron mapped Newfoundland and Labrador over the course of one summer. Streich was later involved in intelligence photography for AIRLANT. After assignments in Europe and Africa he had a long assignment in the Alaska CDR. Streich volunteered for Operation Deepfreeze in 1955. The preparations for the trip, the trip itself, and the arrival at Little America are described. Streich discusses his impressions of Admiral Byrd and describes the development of the first runway on ice at McMurdo Station, the construction of which was headed by Byrd and Hebbe. He also describes winter conditions, moving sea ice, and the flying reconnaissance used to locate the trail from Little America to Byrd Station. Streich discusses the challenges to survival after his plane crashed in a whiteout, after which he and the other members of the flight crew walked for several miles before being rescued. The preparation of equipment over the winter months is discussed, along with the construction and first flight to Byrd Station during Streich’s second summer of residency. He made the first flight to this station and upon return to the US he continued his work in the Heavy Photographic Squadron. Major Themes Cdr. Streich’s educational background First project in photogrammetry in Greenland and Labrador Cdr. Streich’s experiences in intelligence and photography for the AIRLANT observers Aviation challenges in Alaska Preparation for flying in the Antarctic Returning to Little America V The use of aircraft to lay out a trail between Little America and the Byrd Station Antarctic whiteouts Antarctic living conditions at Little America Station Antarctic sunrise The establishment of the Byrd Station Streich’s experiences after returning to the US Streich’s definition of an “explorer”