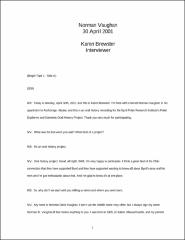 Norman Dane Vaughan was born in 1905 in Salem, Massachusetts, his family coming from Wales and the New England area. He grew up between Salem and Hamilton, MA. His father was the inventor of Vaughan's Ivory Sole leather, the white leather used for the soles of nursing shoes. At the age of 12, Vaughan was sent to boarding school at the Fesenen School in West Newton, MA and then on to Milton Academy. From Milton, Vaughan went on to Harvard (Class of 1929) and studied Meteorology. He ended his studies there in his third year upon reading of the Byrd Expedition (I) in the Boston Transcript. The Admiral accepted him as a dog-sled driver a few days after his reading of the article. Vaughan talks about going to collect the dogs in Wonalancet, New Hampshire and working as a dishwasher/butler at a local inn. In the end, the dog count totaled 97, given to the Expedition by people around the country. This selection process took place from 1925-26 (?) and in 1928, Byrd came to inspect the dogs and approve the passage of Vaughan and his two assistants, Goodale and Crockett. The men and dogs traveled on the Sir James Clark Ross Norwegian whaling boat out of Norfolk, VA to New Zealand. Vaughan discusses the whaling operation, specifically the process of sectioning the carcass and rendering oil from the blubber. Upon arrival in New Zealand, the men met up with Byrd, who had come down from Boston and through the Panama Canal. They served as crewmembers on the sailing ship as well as taking care of the dogs. Vaughan discusses funding for passage through the Canal and also his thoughts on Byrd as a leader for the group. He also comments on the location of Little America, how it was chosen, and the process of hauling food and supplies to the camp. Vaughan goes on to talk about the style of harnesses used for the dog sled teams and also the type of gear used by the expedition members (fur clothing, caribou sleeping bags, footwear). The interactions between team members is also discussed, especially those during the long months of isolation. Byrd's polar flight and Gould's survey of the Queen Maud Mountains is discussed; Vaughan was a part of Gould's expedition. He explains the navigational system that was devised for the trip, involving a forward skier with a compass rose attached to his ski and another compass on the sled. Wintering over in Antarctica is also discussed, with an emphasis on entertainment and diversions that were made to make the time pass. Vaughan also talks of his time spent on the Grenfell Mission. Grenfell was an English doctor who came to help Labrador and Newfoundland fishermen with medical problems including inflamed hands and fingers. He established a hospital in St. Anthony, Newfoundland and built satellite stations in the surrounding area. Vaughan's job was to take the dogsled out and cut and collect firewood for the hospital; he was later promoted to driving the doctor from village to village to provide medical care. This was in 1925, prior to his time on the Byrd Expedition. Post Byrd Expedition, Vaughan went into advertising, working for N.W. Ayer and Company (N.W. Ayer and Son?) in Boston. After six years he left and went on to work for a furniture manufacturer out of Ashburnham, MA. He then established his own business selling chain saws, eventually working for Homelite selling pumps and generators before joining the Army during World War II where he was assigned to the barrage balloon squadron. He later was put into the Air Force search and rescue unit, using dogs (he at one time was overseeing and running 425 dogs). Vaughan discusses the Yalta Conference and the presence of rescue boats in and around the area at the time. He also mentions his biggest rescue, which included 27 crewmen and 8 airplanes in southern Greenland. In 1972 (73?) Vaughan moved to Alaska. He shoveled snow for people to earn money and food, eventually gaining a job as a janitor at the University of Alaska. While working there, Vaughan began training his team of sled dogs. In 1975 he entered his first Iditarod race. He went on to run 13 Iditarods. He also discusses his plan to climb Mount Vaughan (in the Antarctic) in 2005 on his 100th birthday, having already climbed it on in 1994. Vaughan talks about his greatest achievements and regrets throughout the course of his career, including his motto "Dream big and dare to fail". He talks of mentors or inspirational figures in his life such as Admiral Byrd, Dr. Gould, Captain Bob Bartlett, and Dr. Grenfell. Vaughan also reminisces about the Serum Run in 1925, when he brought diphtheria antitoxin from Nenana to Nome in a relay of 18 dog mushers, which he later reenacted annually to keep the history of it alive. He also discusses the digging out of a P-38 airplane from a segment of glacier in Antarctica in 1982, now known as the Glacier Girl and stored in Kentucky. Vaughan goes on to discuss the changes that have occurred in dog mushing over the course of his life, including the advancement of technology and science and the use of airplanes and snowmobiles over dog teams. He also mentions the banning of dog teams from Antarctica due to distemper and the current use of handlers in dog sled teams. Vaughan ends with a statement regarding an honorary doctorate at the University of Alaska, which he would be receiving later that year (2001).