Interview of Arlo U. Landolt by Brian Shoemaker 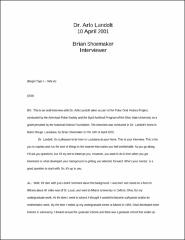 Dr. Landolt was born in Illinois and did his undergraduate work at Miami University in Oxford, Ohio. During his time at Miami he first heard of the IGY (International Geophysical Year) through library publications. In the fall of 1955 he went on to a graduate course in astronomy at Indiana University. While a student at Indiana, Landolt applied for several IGY jobs in the Antarctic and was accepted, beginning work after his first year of graduate school (Summer, 1956). Landolt was first introduced to Paul Siple during the 1956 training. This training took place at Yerkes Observatory in Wisconsin and the Air Force Research Center in Boston from September to December of 1956. The team left for the Antarctic from San Diego around New Year's Day of 1957. The flight path was as follows: San Diego to Hawaii, Hawaii to Tahiti, through Campa Island, and on to Christchurch, New Zealand. At Christchurch the team boarded the USS Curtiss to make their way to Antarctica. The icebreaker that preceded the Curtiss was the USS Glacier. Upon arrival the team spent time at McMurdo station and explored Scott's Hill. From McMurdo the team went on to the Pole and spent the first week helping to secure the base for winter. The team was isolated beginning in mid-February until late October. Landolt discusses the final sunset of the year, which lasted for days. He describes the twilight terminator (the band showing where the sun does not illuminate the sky anymore, but where there is still sunlight that steadily advances across the sky as the sun gets farther and farther below the horizon). Landolt goes on to discuss the difference between an airglow and an aurora and how each can be measured, using an All-Sky Camera and a spectrograph. These images were taken beginning in April of 1957 and ending in September of the same year. Similar types of information gathering were taking place in the Arctic, Ellsworth Station, McMurdo Station, Wilkes Station, and Little America. Upon return, the visual data collected was sent to Cornell University and the spectroscopic and imaging data went to Joe Chamberlain (among others). Landolt discusses other experiments and research taking place during the IGY, including the Weather Bureau research on windchills, high and low temperatures, measurement of ionospheric changes, glaciological studies, and Paul Siple's research involving hydroponic gardening and the use of a theodolite to measure the altitude of the stars. Landolt moves on to discuss interpersonal relationships among the team. Paul Siple was the head of the scientific contingent and Jack Tuck was the head of the Seabees (Navy contingent). The men participated in a series of talks/ lectures, which involved all aspects of IGY research and work, from scientific to practical. There were also happy hours once or twice a week (typically Wednesdays and Saturdays), which were regulated by the ship's store, at which each man had a personal account. He goes on to describe the team's anticipation of the sunrise and the interesting things it exposed, such as sastrugi (wind-sculpted snow drifts). Landolt also mentions the limits of mobility faced by the men, who were required to stay within sight of the camp to avoid getting lost in whiteouts. Landolt also briefly describes the change over to a new crew and the effect this had on those who were getting ready to leave. Landolt discusses the process of leaving the Pole, stops that were made, and the route that was taken back to the United States. Upon return, the men wrote their reports at the Air Force Cambridge Research Center in Boston (Spring of 1958). Landolt then returned to Indiana University and finished his PhD in astronomy. He concludes his interview with a discussion of his astronomy career and the observatories he has visited as a result of his work at Louisiana State University in Baton Rouge.