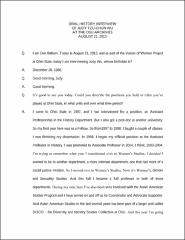 Judy Tzu-Chun Wu describes her career at the university as a faculty member who holds joint appointments in the Department of History and the Department of Women’s, Gender, and Sexuality Studies. She also discusses her work for the Asian-American Studies Program and other components of DISCO, the Diversity and Identity Studies Collective at OSU. Wu grew up in Spokane, Washington, in an immigrant family from Taiwan. After earning her bachelor’s and master’s degrees from Stanford, Wu then worked on her Ph.D there until she was hired by Ohio State in 1997 on a fellowship, during which she finished her dissertation. The next year, she became an assistant professor of History. Later, she switched to the Department of Women’s Studies, and now she has a dual appointment in both as a professor. Having faced discrimination as a child, Wu discusses her advocacy for inclusion both at Stanford and here at Ohio State. Her work also has extended into the Columbus community, with an Asian American Community Oral History Project she started in 2013. Wu also discusses the current climate at OSU for inclusion, and her continuing efforts to improve that climate.