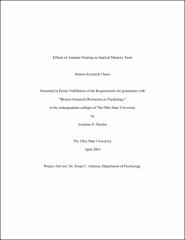 Theory of Mind (TOM) has been a growing topic in the field of developmental psychology. How we recognize which objects in the world are agents and which are not is an open question. The goal of these studies was to design a priming method based on implicit memory tasks that could be used to examine participants’ representations of animate agents. Undergraduates (N=173) at The Ohio State University participated in one of three studies. Participants in all three were first primed with the same video depicting a non-human, animate agent -- the Pixar Luxo Jr. Lamp short. The implicit memory task differed for each study; studies 1 and 2 presented animate-relevant and inanimate-relevant words in a lexical decision task and then later asked participants to recognize the words. Study 3 utilized a stem completion task. Statistical analysis was performed using descriptive statistics and significance testing with RMANOVA. Results for all studies indicate that we were unable to capture a priming effect. Although we were unable to design a method to successfully detect priming in this context, the methodologies used and the limitations of the studies are important contributions towards future studies looking to capture a priming effect of animacy in humans as part of the growing field of TOM.