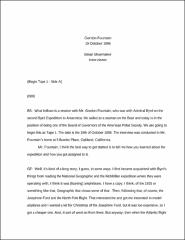 Gordon Fountain, as a seaman on the Bear of Oakland, sailed to Antarctica on the Byrd’s Second Expedition to Antarctica. At the time of this interview, he was a member of the Board of Governors of the American Polar Society. Fountain’s interest in Antarctica started as a child. He read about the Josephine Ford and Byrd’s North Pole flight, and followed avidly the trans-Atlantic competition between Charles Lindbergh and Byrd for the Orteig prize. In 1932, when the Bear was brought to the Boston Navy Yard for repairs, Fountain, a local youth, volunteered to help rehabilitate the ship. The temporary skipper was Ike Schlossback. In September 1933, the Bear sailed for Antarctica, but the young Fountain was left behind. But several members of the crew departed along the way, and Fountain joined the ship in New Zealand working for a shilling a month. In Dunedin, New Zealand, the mast was replaced, 50 tons of coal were stowed on the deck, and the ship, alternately burning coal or using its sails to conserve coal, sailed south. During storms it was hard to keep much of the coal from washing overboard. This voyage of the Bear was described as a “pick-up” cruise since Admiral Byrd had been in Antarctica for some time, and was preparing to come home. The Bear coasted along the Admiralty Range, McMurdo Sound, Discovery Inlet, and stopped at Little America and the Bay of Whales. Because of the ice pack they could not reach the mainland, and so the ship was tied up to the bay ice that often broke loose. One task was to help dig out the Ford Tri-Motor plane that was frozen in the ice. The Tri-Motor and other planes, and other pieces of heavy equipment, were loaded aboard the Jacob Ruppert that was standing by. As this happened it was necessary to use telephone poles as barriers to keep the ship from banging into the edge of the ice pack. Another plane, the Fairchild, was recovered, but it needed substantial repairs. Fountain met Admiral Byrd several times on the shelf ice as preparations continued to depart for home. He recalls the impressive physical strength of Byrd, diminished somewhat as a result of the Admiral’s exposure to carbon monoxide, and subsequent serious illness, that had occurred while he had over wintered alone for several months. Bud Waite and Pete Demas had rescued him. Two other prominent explorers were in Antarctica at about the same time, Lincoln Ellsworth and Sir Hubert Wilkins. Among the items loaded on board the Bear for the trip home were a collection of penguins, only six of which survived the trip back, and several of the sled dogs. One female dog had six pups on the way home; these were given out to various crew members. When the loading was complete, the ship departed for Dunedin, New Zealand, but first there was a stop at Discovery Inlet to catch a few more penguins. The trip back proved uneventful; they encountered very little pack ice. There were a couple of hard storms that caused a severe roll of the ship. Fountain recalled several incidents from the initial trip south from New Zealand. They had three men and a mate to a watch. Sometimes the crews from two watches would be required to adjust the sails, and occasionally all hands, including the cook, needed to be on deck. Wheel watch lasted an hour and twenty minutes. One memory concerned John Murphy, the boatswain, who made coffee by running boiler steam through the water until it was hot enough to drink. It was quick, but tasted of boiler chemicals. Another memory concerned supplies from shelves being tossed onto the men’s bunks during storms. The Skipper of the Bear was Robert English, a regular navy man who was “seconded” to the expedition, and who later became both an Admiral and President of the American Polar Society. Once repairs were completed at Dunedin, the Bear set out on the forty-day trip to the Panama Canal. En-route, it met up with the Ruppert at Easter Island where a load of coal was transferred to the Bear. While there, the natives of Easter Island traded carved aku-aku’s for used clothing, tobacco, and hats. More coal was taken on board in Panama, so much so that coal dust covered much of the ship. Once Admiral Byrd was invited to come from the Ruppert to the Bear for dinner, but when he saw coal dust in the mashed potatoes he refused to stay. After a stop at Quantico, the ship returned home to Boston. Ike Schlossback returned on the Ruppert, but he would make other trips to Antarctica, including the third Byrd Expedition of 1939, and the Finn Ronne Expedition of 1947-1948. The crews of the two ships were invited to Washington to meet President Roosevelt. After meeting the President, the ship returned to Boston where Mayor Curley, just before he went to jail, entertained them. Fountain got to know Finn Ronne quite well. He described Ronne as a “hard-nosed Norwegian” who “when he said jump, he expected people to jump.” It was Ronne who recommended Fountain for membership in the American Polar Society. Another friend was Louise Boyd. The American Polar Society was organized about this time. Major Themes Voyage of the Bear, 1936-37, to retrieve Admiral Byrd and his party from Antarctica Challenges at sea and on shore in a difficult natural environment Brief recollections of Admiral Byrd Remembrances of several other prominent Antarctic explorers