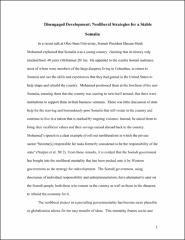 Somalia still has a problem with ineffective central governance that began when colonial rule ended in the 1960’s. Recently, a new democratic government has taken office vowing to bring an end to this troubling post-colonial legacy. But despite its promotion of a new vision for the country, Somalis continue to be plagued by violence, malnutrition, and political and economic instability. This project will argue that responsibility for this uphill struggle lies in Western redevelopment strategies whose goal is to liberalize the global south. Through this study, it will become evident how neoliberal discourses of entrepreneurialism and self-responsibility have allowed the new Somali government to disengage from enacting policies to change the harsh and unforgiving living environment that many Somalis experience every day. It is a qualitative study whose evidential basis includes analyzing speeches and writing by members of the Somali government, studies conducted by NGOs, as well as a literature review. Neoliberal governmental failure to regulate and direct change in Somalia has affected two important populations, both committed to the development of the, in different ways. The Somali diaspora appears to endorse the neoliberal project as it continues to provide remittances and strong governmental leaders that are crucial to its implementation. Domestic Somalis have also bought into the neoliberal mentality, however, a perceived lack of substantive political and economic power has led some to turn to informal means of carving out a reasonable livelihood for themselves and others (i.e. terrorism and piracy). Grafting Western neoliberal values onto a previously illiberal nation has only exacerbated the inequality, contradictions, and dissonance that it set out to remedy.