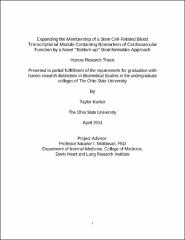 Background: The circulating stem/progenitor cells (CSPCs) system comprises a variety of rare cells with mixed primitive and differentiation characteristics. So far, this system has eluded traditional methods of characterization. We recently showed that quantitative real-time PCR, the most sensitive and reliable gene expression analysis tool available, consistently detects a comprehensive battery of gene markers in all tested peripheral blood mononuclear cell samples from adult human subjects. Moreover, network representation of these genes’ co-variation across samples organizes them into two modules of the hierarchical transcriptional network. One module, termed the ‘cardiovascular module’ (CVM), was inversely related with the age, vascular stiffness and blood pressure of healthy blood donors, and highly depressed (but paradoxically more compact) in hypertensive patients. However, the targeted definition of CVM composition required an expansion to include more potential members. These could be extracted from high-throughput, unbiased methods such as gene microarrays. Approach and Results: We verified the ability of Affymetrix gene chips, available on public databases, to sense the CVM-associated rare transcripts, and found that only two (out of 15) were detectable. This oriented us towards gene chips hybridized with samples from children, where the frequency of CSPCs is known to be higher, and found that 5 CVM members were detectable. Implementing the ‘guilt-by-association’ (GBA) principle, we used these markers as ‘seed genes’ to generate co-variation lists. These were organized as network ‘neighborhoods’ which were then fused in increasingly higher gene communities that maintained their modular organization around their hub (i.e., ‘seed’) gene. This ‘bottom-up’ approach to reconstitute a network is both original and promising, as it reveals a large crop of candidate genes with meaningful known roles in the cardiovascular field (currently being validated by qRT-PCR). We also compared our method with the traditional “top-down” Weighted Gene Correlation Network Analysis (WGCNA) method, as well as a direct ‘Clique Mining’ protocol applied to an expanded list of stemness genes. Neither method produced modules enriched in CVM genes, even when the source data were blood samples from patients recovering from burn injury, a condition expected to stimulate CSPC release from bone marrow. However, the latter method did suggest the existence of a module containing the CVM gene Notch4 as being mobilized in burn patients, and one organized around OLR1/oxidized LDL receptor with a more widespread occurrence. Conclusions: Here, we demonstrate a new method to expand a transcriptional network by detection of candidate members with particular relevance for the analysis of rare transcripts, such as CSPC markers. This method has the potential to be applied for cell isolation, diagnostic, prognostic, and treatment purposes in a variety of CSPC and other cell-dependent medical conditions.