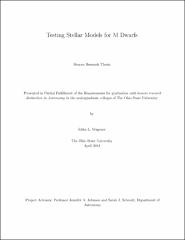 M dwarfs have expected lifetimes of at least 15 Gyr for the main phase of their lives, which is longer than the current age of the Universe. The chemical composition of the surface of an M dwarf, which is nearly constant during this main phase, is the same as the nearby gas of the galaxy in which it formed and at the time that it formed, so M dwarfs create a "fossil record" with which to examine the history and evolution of their host galaxies. This makes M dwarfs extremely important for study, but we do not see enough M dwarfs with few heavy elements, which are the oldest of the M dwarfs, to match predictions of compositions of stars for the local stellar neighborhood. Distances for these M dwarfs are important to accurately determine the extent of this deficiency, but these are difficult to determine accurately for the older M dwarfs that are of the most interest. M dwarfs, and especially older M dwarfs, are also observationally difficult to study in general because they are very dim compared to other stars. In this thesis, we test two different stellar isochrone models, the one by the Dartmouth group and the one by the Padova group, which we will later use to calculate M dwarf distances and investigate the observed discrepancy further. We find that the Padova group's model ts better with spectroscopic and photometric data taken from two stellar surveys of the Galaxy, APOGEE and SDSS. We then suggest improvements on the tests we have completed and detail the next steps we hope to take in our investigation. We hope that this deep study of M dwarfs will provide more insights into the chemical evolution of the Milky Way, and allow models of stellar formation and Galactic chemical evolution to be improved upon for future use.