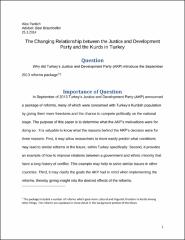 This thesis investigates the circumstances surrounding two periods of reforms concerning the Kurds in Turkey to determine possible reasons for the introduction of reforms in 2013. It compiles the literature for each of these periods of reform and determines that a credible commitment from the European Union to Turkish membership was responsible for the first period while the second period occurred due to domestic political factors. The thesis then examines both of these possible causes as well as a third not supported by the literature-that the Turkish government’s goal may have been to improve relations with the government of the autonomous Iraqi Kurdish province- in order to determine which of these was responsible for the September 2013 reforms being introduced. After analysis, this thesis finds that the most likely reason for the introduction of the reforms was that the ruling Justice and Development party hoped to form a conservative alliance with Kurdish voters and political organizations.