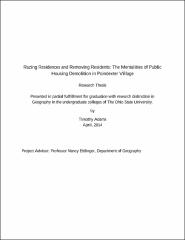 In 2008, the Columbus Metropolitan Housing Authority (CMHA) announced plans to demolish and redevelop Poindexter Village, a public housing community in the Near East Side adjacent to the Ohio State University Hospital East. Although preservation experts found that rehabilitating and reusing the properties for affordable housing would cost less than redevelopment, CMHA moved forward with demolition, displacing the neighborhood's approximately 1,200 poor and elderly residents. In place of Poindexter Village, CMHA will construct a mixed-income development, consisting in part of public housing meant for the poor and elderly. At first glance, it appears bizarre that developers and city officials would dislocate poor and elderly residents only to invite other poor and elderly people to live in the new development, especially when the possibility for reusing the existing properties was viable. In this paper, I ask: how have planners and policymakers been guided by neoliberal mentalities that privilege economic investment and growth as a strategy to address social problems? Through interviews with development actors, I found that many developers were guided assumptions that privileged economic growth and entrepreneurialism as the proper strategy for achieving positive social outcomes. I also found that many developers had internalized racist assumptions regarding a "culture of poverty," which intersected with the privileging of economic growth. These assumptions led development actors away from considering alternative planning strategies that may have preserved additional affordable housing.I also offer a critical history of Poindexter Village showing that these practices represent in many ways continuity rather than a new era of planning practices and mentalities.