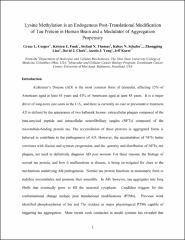 Alzheimer’s Disease (AD) is the most common form of dementia, affecting 13% of Americans aged at least 65 years and 43% of Americans aged at least 85 years. It is a major driver of long-term care costs in the U.S., and there is currently no cure or preventative treatment. AD is defined by the appearance of two hallmark lesions: extracellular plaques composed of the beta-amyloid peptide and intracellular neurofibrillary tangles (NFTs) composed of the microtubule-binding protein tau. The accumulation of these proteins in aggregated forms is believed to contribute to the pathogenesis of AD. However, the accumulation of NFTs better correlates with disease and symtom progression, and the quantity and distribution of NFTs, not plaques, are used to definitvely diagnose AD post mortem. For these reasons, the biology of normal tau protein, and how it malfunctions in disease, is being investigated for clues to the mechanisms underlying AD pathogenesis. Normal tau protein functions in monomeric form to stabilize microtubules and promote their assembly. In AD, however, tau aggregates into long fibrils that eventually grow to fill the neuronal cytoplasm. Candidate triggers for this conformational change include post translational modifications (PTMs). Previous work identified phosphorylation of Ser and Thr residues as major physiological PTMs capable of triggering tau aggregation. More recent work conducted in model systems has revealed that PTMs of Lys residues can also serve to modulate tau aggregation propensity. But to date, Lys modifications have not been demonstrated at single residue resolution in authentic human brain specimens. To test the hypothesis that tau is normally modified on Lys residues, tau was isolated from normal human brain (n = 4; all cases 55 yr old) and subjected to a “bottom up” proteomic characterization. In this approach, purified human tau protein was digested with the proteolytic enzyme trypsin, and the resulting peptides characterized by mass spectroscopy methods. The resulting structural characterization revealed methylation as a novel tau PTM on Lys residues. The modification clustered perdominantly in the C-terminal region of the tau molecule known to mediate pathological self association. To characterize the effects of Lys methylation on tau function, purified recombinant tau was subjected to chemical methylation to generate a library of modified tau species that varied with respect to methylation stoichiometry. The methylated samples were then tested for their ability to promote microtubule assembly (i.e., normal tau function), as well as their ability to aggregate (i.e., pathological malfunction). To test the effect of methylation on tau’s microtubule assembly promoting activity, methyl tau was incubated with tubulin and an absorbance reading was taken every two minutes over the course of an hour to monitor the formation of microtubules. This experiment revealed that at lower, physiological levels, methylation did not inhibit tau’s ability to promote microtubule assembly. In contrast, a transmission electron microscope study examining aggregate formation of methyl tau showed that even low, physiological levels of methylation were able to inhibit tau aggregation. To characterize the mechanism of inhibition, the effects of Lys methylation on tau aggregation propensity was examined as function of time and tau protein concentration. These studies revealed that methylation inhibited aggregation by increasing the amount of protein needed to form aggregates. It did so by increasing tau’s dissociation rate from fibrils, and decreasing the fibril extension rate. In addition, methylation slowed aggregation rate by depressing filament nucleation, the rate limiting step in tau filament formation. Together these data show that low-occupancy methylation is a normal human tau PTM that does not affect tau’s normal function, but that does depress tau aggregation propensity. The experimental findings point to methylation being a potential regulatory PTM of tau. We postulate that methylation may decrease in AD compared to normal brain, and that maintaining or increasing methylation of tau could be a therapeutic approach for slowing the rate and extent of neurofibrillary lesion formation in AD.