When grammar meets politics: Uses of stigmatized language on a political talk show 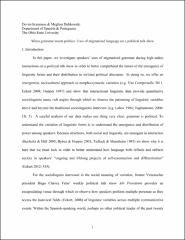 In this study, we trace the use of stigmatized Spanish grammatical variants on a Venezuelan political talk show, Aló Presidente, with the aim of better understanding how non-standard grammar associated with poor and uneducated speakers can be taken up as ideological resources in high-stakes political interactions. These stigmatized grammatical forms, conjugations of the presentational verb haber displaying non-standard plural agreement, are widely held to be indexical of the primary political constituency of the show’s host: the controversial former Venezuelan president Hugo Chavez. Hypothesizing that the use of these variants will be predicted in both colorful stylistic uses of language and interpersonal dialogue, we submit 500 observations of speakers’ uses of haber spanning 13 years of broadcast and 72 speakers to statistical modeling using R. Variables previously found to predict this variation (e.g. animacy, syntactic position of NP, speaker gender) are coded along with a measure of a speaker’s regularity on the show, the gender of one’s interlocutor, and the intended audience of a given utterance (general audience, individual, group). Our results show that a speaker’s relationship to Chávez and the show is the most important predictor of non-standard agreement on Aló Presidente. Non-regular guests and especially women are the most likely to produce these stigmatized forms while Chávez does so very infrequently. In fact, we find this variable to be extremely uncharacteristic of Chávez’s lively tirades and colorful speech styles directed at his general audience. When he does make use of them, these variants emerge primarily in interpersonal dialogues between Chávez and these same non-regular guests. More telling, however, is the finding that they are never used during conversations between Chávez and the regular guests on the show: his inner political circle and close friends. We interpret these findings as indicative of the political nature of grammar and assert that in order to comprehend the variation of linguistic forms we must simultaneously understand the emergence and distribution of power among speakers.