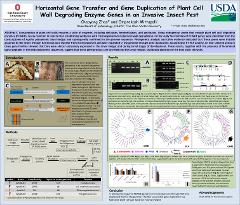 Insects were long thought to lack endogenous genes encoding plant cell wall degrading enzymes (PCWDEs). However, this hypothesis has been challenged since symbiotic-independent PCWDE genes and enzymes were found in several insect species. As an economically-important wood-feeding beetle, how the invasive insect emerald ash borer (Agrilus planipennis) degrades plant cell walls and utilizes their contents is of high interest. We identified three glycoside hydrolase (GH) gene families and one polysaccharide lyase (PL) gene family within the A. planipennis genome, which putatively encode for α-L-arabinofuranosidases (GH43), endoglucanases (GH44), polygalacturonases (GH28) and Rhamnogalacturonases (PL4), respectively. Phylogenetic analysis showed that they exhibit close relationship with bacterial or fungal homologs, indicating that acquisition of these genes by the insect is through the horizontal gene transfer (HGT). Each family has multiple gene copies in the A. planipennis genome and they reside in the same clades, implying occurrence of the gene duplication events following HGT during evolution. To test the hypothesis that the HGT-associated gene duplication is adaptive, we selected one GH44 gene, two GH43 genes and one PL4 gene for quantitative RT-PCR analysis. The specific expression in the larval midgut and during larval stages of development, together with the presence of N-terminal signal peptides in the deduced protein sequences, suggest that these gene products are secreted into the larval midgut, facilitating digestion of the host plant cell walls.