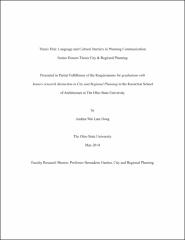 English is considered one of the international languages. Although, there are more than 6,170 living languages in the world and most of them are spoken in Africa or Asia. When English is a second language, is its use enough to communicate technical information? Although all parties may speak English, some may not understand it as well as others. Additionally, any information may be viewed through a cultural lens. Through the study of critical theory, communication theory in planning and cross cultural communication tools used today, this research seeks to test, in a context where English is the common language among non-native speakers, which forms of communication will improve the understanding of a planning technique. The Solomon Four Group experimental design is used to test how well each subject performed in a series of four tasks. The four tasks were given in a randomized order in the experiment: two planning related and two non-planning related. The planning-related tasks included 1) creating a building parcel from given form-based codes and 2) creating a building structure from given form based codes. The non-planning related tasks included 1) an assembling task and 2) folding an origami. The experiment tracked the amount of time it took to complete each task and the accuracy of each step in each task. The experiment showed that learning and understanding the same amount of information when given in the same context subjects varies. Visualization can provide the audience with a strong and comprehensible idea of the proposed plan, whether native or non-native English speakers. These results help further the optimization of communication of planning techniques between two parties of different English abilities and cultures. This study provides support for the use of visual communication techniques rather than the traditional use of translators when working in English in countries whose native language is not English.