A House Divided: The Politics of Thomas Kyd's The Spanish Tragedy 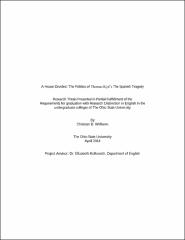 Many scholars have written about the social and political issues and conflicts that plagued both the historical and fictional sixteenth-century Spain represented in Thomas Kyd's The Spanish Tragedy. Some scholars allude to the historical national conflict between sixteenth-century Spain and England while others discuss class antagonism, gender struggle and familial issues in the drama. In my essay, I bring together these different ideas, reproduce them in a single work and present The Spanish Tragedy as a holistic and all-encompassing depiction of sociopolitical struggle that afflicted sixteenth-century Spain. In reproducing Spain’s sixteenth-century sociopolitical world, Kyd writes The Spanish Tragedy as a war story in which he captures conflict, not only on a national scale, but among characters and “little” alliances within the Spanish state. Spain is therefore presented as having to deal with warfare on two fronts: one abroad and one at home. Though Spain seeks to align its nation with Portugal in preparation for a possible war against “little England,” the conflict among members of the Spanish regime show us a nation also at war with itself. As a consequence, because a “house divided against itself cannot stand” (Mark 3:25), a nation at war with itself is destined to be destroyed, not from without, but from within.