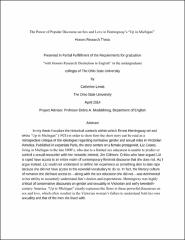 Hemingway, Ernest
"Up in Michigan"
Female sexuality
"In Our Time"
Victorian America
Gender

In my thesis I explore the historical contexts within which Ernest Hemingway set and wrote “Up in Michigan” (1921) in order to show how the short story can be read as a retrospective critique of the ideologies regarding normative gender and sexual roles in Victorian America. Published in expatriate Paris, the story centers on a female protagonist, Liz Coates, living in Michigan in the late 1800’s, who due to a limited sex education is unable to predict or control a sexual encounter with her romantic interest, Jim Gilmore. Critics who have argued Liz is raped have access to an entire realm of contemporary feminist discourse that she does not. As I argue instead, Liz could not understand or define her experience as something akin to date rape because she did not have access to the essential vocabulary to do so. In fact, the literary culture of romance she did have access to—along with the sex education she did not—was detrimental to her ability to accurately understand Jim’s desires and expectations. Hemingway was highly critical of conservative discourses on gender and sexuality in Victorian and early twentieth-century America. “Up in Michigan” clearly expresses the flaws in these powerful discourses on sex and love, which often resulted in the Victorian woman’s failure to understand both her own sexuality and that of the men she lived with.