Style and Gender in Ernest Hemingway’s The Sun Also Rises 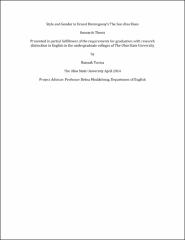 Ernest Hemingway's The Sun Also Rises, although supposedly representative of Hemingway’s "classic" style and masculinity, displays a multiplicity of genders and styles connected by a modernist impulse to create new experimental literary forms to present new content. After a brief debunking of the argument regarding Hemingway’s supposedly masculine style, this thesis will begin with an overview of his experimental styles, followed by an overview of the historical changes that occurred in the way American society both understood and enacted gender and sexuality in the early twentieth century. Finally, this thesis will show how the two are linked in Hemingway’s novel, providing several examples of the way different styles interact within Sun to articulate specific historical changes in gender and sexuality. Though there are many places to take this intersection, this thesis will focus on four examples that show Hemingway’s engagement with creating new styles to represent historically changing conceptions of gender and sexuality.