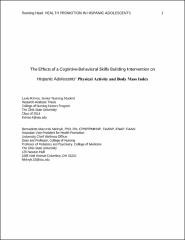 Obesity is a major health condition affecting Hispanic adolescents in the United States. Over the past 30 years, the overweight/obesity rate among children and adolescents has more than tripled (Bode et Al., 2013). As calculated in 2009, 34% of Hispanic adolescents were either overweight or obese (Suglia et Al., 2012). However, little research has been conducted to determine the effectiveness of interventions promoting healthy lifestyles in Hispanic teenagers. Purpose: The purpose of this study was to analyze the efficacy of a cognitive-behavioral skills building intervention, COPE (Creating Opportunities for Personal Empowerment) Healthy Lifestyles TEEN (Thinking, Emotions, Exercise, Nutrition) versus an attention control health promotion intervention, Healthy Teens, on outcomes of healthy lifestyle behaviors and body mass index (BMI) in Hispanic adolescents. Theoretical Framework: The study was based on cognitive theory – the concept that one’s thoughts affect a person’s feelings and behaviors. Subjects: Data were analyzed from a randomized controlled trial which took place from January 2010 to May 2012 among high school students from the Southwest United States. The sample for this secondary data analysis included 522 Hispanic participants out of a total sample of 779 teens, ages 14 to 17 years. Methods: The teenagers were randomly assigned to either the COPE or Healthy Teens intervention. Each intervention consisted of a 15-week program integrated into the teens’ health course one day per week. This study analyzed post-intervention daily pedometer steps and BMI. Results: COPE Hispanic teens demonstrated a significant increase in pedometer steps per day compared to those in Healthy Teens (p = 0.001). There was no significant change in subsequent BMI for either group. The study analyzed BMI measurements taken immediately after program completion, which may be an inadequate timeframe to detect evidence of change in BMI. Significance: Overall, the cognitive behavioral skills building COPE intervention demonstrated an increase in the healthy lifestyle behavior of increasing physical activity, which is important to decrease overweight/obesity rates in Hispanic teens.