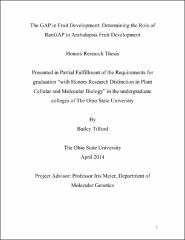 RanGAP is the activating protein for the small GTPase Ran, and is known to be involved in nucleocytoplasmic transport and mitotic cell division across kingdoms. Arabidopsis has two RanGAP proteins, RanGAP1 and RanGAP2, which share 63% amino acid homology. Both proteins contain two functional domains: a localization domain known as the WPP domain, which contains a conserved tryptophanproline- proline motif necessary for interaction with localization binding partners, and a GTPase activation (GAP) domain, which is responsible for Ran binding and activation. Double null mutants in the genes encoding RanGAP1 and RanGAP2 are lethal at an early stage of development. However, a homozygous mutant combining the RanGAP1 null allele and RanGAP2 knockdown allele, called short silique knockdown (SILK), exhibits a reduced fruit (silique) length phenotype. What role RanGAP plays in fruit development, however, is unknown. In order to determine its function, constructs containing wildtype RanGAP1 or mutant RanGAP1 with one or both functional domains mutated were inserted into SILK mutant plants. Their phenotypes were quantified by measuring fruit length and seed number to determine if the RanGAP1 transgene had rescued the short-fruit phenotype. RanGAP1 transgenes with mutations in the GAP domain did not rescue the SILK phenotype whereas mutants that maintained this function did, regardless of localization. These results indicate that it is the GAP function of RanGAP that is important in fruit development. Seed count, however, varied greatly among individual lines with the same transgene, indicating that seed development may depend on the location of the RanGAP1 insertion into the genome. Further analysis of silique cell types indicate that the length phenotype may be due to defects in the differentiation of the cells of the fruit itself. This work highlights the intersection between cell biological processes and developmental events, and shows the relevance of intracellular events to the understanding of whole-plant processes.