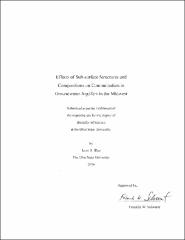 The objectives of this study are to ascertain some of the most common structures and depositional settings in the Midwestern United States and to make suggestions for removal strategies and preventative measures addressed towards reoccurrences. Due to glaciation, the Midwest is mostly composed of unlithified sediments. These rocks have larger pore spaces than lithified rocks, which causes them to be extremely hydraulically conductive. This high conductivity allows for quicker diffusion of contaminants, which is especially prevalent in sand and gravel aquifers. Clays and silts are capable of narrowing down and increasing the speed of flow paths due to being less conductive. The contaminant density is a major part of the ease with which they can flow in the subsurface while remaining difficult to cleanup. Denser-than-water substances will sink to the bottom of a conductive aquifer while lighter-than-water contaminants will rise to the top. Less conductive layers will act as accumulation points for both types of materials as well as flow paths if they are discontinuous or fractured. With the limited number of extraction methods available to cleanup efforts, the best suggestion I can make is to with the original treatment, but to be mindful of the density of the contaminants as well as the geology of the subsurface. Both factors will affect how far down the well will need to be drilled. Lighter contaminants will require a shallower well, whereas denser substances will require deeper wells under relatively homogenous conditions.