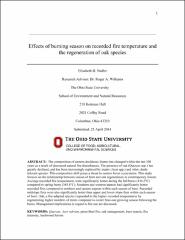 The composition of eastern deciduous forests has changed within the last 100 years as a result of decreased natural fire disturbances. The presence of oak (Quercus spp.) has greatly declined, and has been increasingly replaced by maple (Acer spp.) and other shade-tolerant species. This composition shift poses a threat to eastern forest ecosystems. This study focuses on the relationship between season of burn and oak regeneration in contemporary forests. Average recorded fire temperatures were significantly hotter during the fall burns (436.5°C) compared to spring burns (345.8°C). Southern and western aspects had significantly hotter recorded fires compared to northern and eastern aspects within each season of burn. Recorded midslope fires were also significantly hotter than upper and lower slope fires within each season of burn. Oak, a fire-adapted species responded to the higher recorded temperatures by regenerating higher numbers of stems compared to cooler fires one growing season following the burns. Management implications in regard to fire use are discussed.