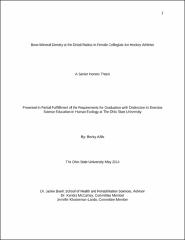 Background: Low bone density in the distal radius has been associated with higher risk for fracture. Research suggests that bone density can be increased through weight-loading the bone via resistance training. In the Ohio State sports nutrition lab, female collegiate hockey players have previously demonstrated low bone mass at the wrist in many players. Because women’s ice hockey is a contact sport, players are subjected to frequent high-impact collisions, increasing their risk of injury. Aim: This protocol was designed to formally monitor the distal radius bone mass of female collegiate hockey players over the course of the season. It was expected that by implementing a program designed to add extra loading to the forearm and wrist over the second half of the 2013-2014 season, we would see a trend to increase BMD at the distal radius from midseason to postseason. Methods: A pre-test/mid-test/post-test design was implemented, with measurements taken in September, December, and March. Dietary intakes were estimated using the Vioscreen computerized Food Frequency, and athletes were measured for serum vitamin D in early January. Bone density was measured prior to beginning the program pre-season, mid-season, and post-season using the GE Lunar iDXA scan. The first half of season did not include any extra weight-loading exercises of the upper extremities to act as a control time period while plan for the second half of season included a higher volume of wrist weight-bearing exercises. Results: Pre-season measures of this athlete cohort demonstrated 33% (6/18) had low bone mass at the wrist. The mid-season wrist measures demonstrated lower densities for many players, with half of the athletes showing decreased bone density at the wrist and 8 players meeting criteria for low bone mass. The post-season wrist measures showed increased bone densities in 9 players, with 4 players maintaining mid-season bone density. However, there were no statistically significant changes in radial BMD across the season when evaluated using repeated measures statistical procedures. Conclusion: Based on the results of this pilot study, more loading of the distal radius may have benefitted players’ bone mass. However, there was likely not enough power to the study due to its short length and the relatively small number of participants.