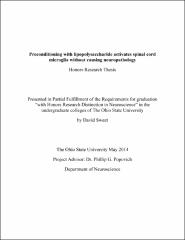 Microglia, the resident immune cells of the central nervous system (CNS), normally provide sentinel functions in intact CNS but once activated by injury or disease, microglia can exacerbate CNS pathology. However, not all forms of microglia activation are injurious. Injecting sub-lethal doses of lipopolysaccharide (LPS), activates microglia but without causing damage. This “preconditioning” can be neuroprotective in the brain; however, it is not known if spinal cord microglia also can be preconditioned with LPS. To test whether LPS can condition spinal cord microglia, mice were injected intraperitoneally daily for four consecutive days with LPS (1mg/kg). The next day, spinal cords were processed and microglia morphology and phenotype were documented using light and fluorescent microscopy. LPS caused visible changes in microglia morphology throughout spinal cord white and gray matter, with microglia occupying more than 2x the surface area in gray matter compared with white matter as compared with comparable measures in saline-injected mice. These effects were most evident in cervical spinal cord as compared with thoracic and lumbar spinal levels. Inflammatory markers including CD16/32 and inducible nitric oxide synthase (iNOS) were increased in LPS-activated microglia but without obvious neuron pathology or cell-death. Activated microglia were often associated with blood vessels suggesting that i.p. LPS might activate microglia across the blood-spinal cord barrier. Ependymal cells lining the central canal also appeared to be proliferating in mice injected with LPS. This response might be harnessed for CNS repair. Indeed, ependyma have stem-like properties and can support axon growth. While LPS usually activates immune cells to be inflammatory and detrimental to surrounding tissues, the current data indicate that preconditioning can prime microglia without eliciting injurious effector functions. By understanding how LPS preconditioning affects microglial phenotype and function, new therapies might be developed to treat CNS trauma and disease.