The New Architecture: Iakov Chernikhov and the Russian Avant-Garde 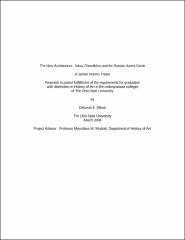 During the period between 1917 and 1932, the Russian avant-garde dominated the art institutions of Petrograd. This period is also defined by social revolution and political upheaval that provides an apt backdrop for the revolutionary nature of Suprematist and Constructivist art. The most salient characteristic of this art is thus the search for a new artistic form relevant to a new epoch. The focus of this paper, defined by Malevich’s asserted evolution toward a new architecture, outlines the melding of two major art forms—painting and architecture—seen in the work of Iakov Chernikhov. Neither Suprematist nor Constructivist, Chernikhov epitomizes the many different societal roles of an architect with his prolific writing, teaching, and visionary architectural drawing. Chernikhov’s participation in the transition from the traditional to the avant-garde within the academy at Petrograd allows his work and the work of his colleagues to be placed in a larger historical progression. Amid the revolutionary rhetoric, visual and ideological allusions to the classical past of both Russian and Western architecture were still very much alive—though in a new idiom that addressed the issue of architecture’s expressiveness. Both generations—that of Malevich and that of Chernikhov—created art for real space, art that could be active within society. These vestiges of classical art within the avant-garde itself present the later shift to Socialist Realism as a next stage of progression, not necessarily the death or failure of Chernikhov and the avant-garde. In studying Chernikhov’s work, the challenge is to reconcile the individual ambitions and influences that present continuity as the dominant artistic aspect with the societal fluxes that stress stylistic change within modern art and architecture.