An Investigation of Response Bias in Tone Glide Direction Identification 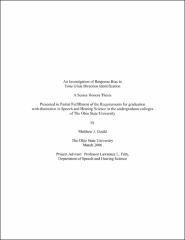 Encoding speech is effortless for the average human listener. Speech sounds are identified by different patterns of resonance in the vocal tract called formants. The transitions between formants are essential to the understanding of speech. More specifically, the direction of frequency change (“up” or “down”) across formant transitions is of particular interest. In this experiment, frequency-modulated (FM) tone glides were used to approximate basic characteristics of formant transitions in speech. The study is a partial replication of two previous studies that reported a difference in accuracy when identifying “up” vs. “down” tone glides. In order to determine whether these differences were attributable to response bias, this study used a two-interval forced choice procedure. Four young adults with normal hearing performed the task by listening to two intervals, one containing a rising or falling tone glide and the other a tone with constant frequency. They were asked to respond by choosing the interval which contained the tone glide. Three center frequencies were tested: 850, 2250 and 3850 Hz. All four subjects were able to identify glides rising in frequency with better accuracy than glides falling in frequency across all three center frequencies. The largest gap in accuracy of detecting “up” vs. “down” glides was at 2250 Hz. Statistical analysis of subject responses confirmed that three out of four subjects did not exhibit a response bias. Therefore, there must be an alternative explanation for the difference in direction identification for “up” vs. “down” tone glides.