Ethanol in an Era of High Energy Prices 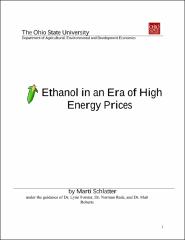 With an increased demand for energy in the world and stagnant petroleum production, high energy costs are unlikely to abate. To respond, the U.S. ethanol industry has been expanding its current production This study analyzes the impact of an ethanol plant on local corn markets, finding that ethanol production can have positive effects on the local cash corn markets. Another reason for this U.S. production, despite the ability to import ethanol cheaper from Brazil, is Americans’ perception of homegrown fuels and an increased interest in less reliance in foreign sources of fuel. This study compares the cost of ethanol produced in the U.S. and the cost of imported ethanol. As long as consumption exceeds production, ethanol will continue to be imported, despite the large tariff currently in place. The potential increased usage of ethanol as a replacement for MTBE and as an alternative fuel has the ability to use what the U.S. is producing domestically, as well as import some ethanol from Brazil. The largest change needed in the ethanol industry is a new subsidy policy. With a fixed subsidy, the government is wasting taxpayers’ money by subsidizing large profits for ethanol producers. This study proposes a flexible subsidy policy, which would allow producers would get help from the government only as needed when indicated by gasoline and corn prices. The U.S. ethanol industry is only going to continue growing in the coming years. To meet the needs of this industry, ethanol policy must also continue to evolve.