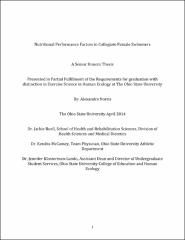 Background: Iron deficiency (ID) is one of the most common nutrient deficiencies in the US, especially for female athletes. Iron status is negatively impacted by intense physical exercise by reducing serum iron levels through various proposed mechanisms. This can impair oxygen transport, which can decrease endurance capacity and energy levels, increase fatigue levels, and ultimately hinder aerobic exercise performance. Purpose: The necessary level of serum ferritin to support high-level performance remains controversial and is poorly validated using field data. Ferritin levels of the Ohio State University Women’s Swimming team has shown great variability over the past years when measured clinically. Therefore, the purpose of this study was to look at iron status and its association with performance in NCAA Division I female swimmers over a competitive season. Methods: The study employed a pre, mid, and post-test design. Data collection started in September, and was collected roughly every three months. Serum ferritins were measured from a venous blood sample. Diets were estimated by the on-line Vioscreen Food Frequency tool to approximate daily consumption. The Australian Institute of Sport’s athlete fatigue questionnaire was the primary self-report tool of fatigue symptoms. Performance was gauged by mid- and NCAA swim-event times. Results: Serum ferritins demonstrated wide variability across the season. A repeated measures ANOVA showed an increased ferritin at the end of the season compared with first and second measures. There were no meaningful relationships between change in ferritin and performance, but there were correlations with energy intake and fatigue levels at different points in the season. Conclusion: This pilot study showed that ferritin levels changed throughout the year, but that performance and iron status (ferritin) were not correlated. However, future research should look further into reasons for why ferritin levels changed.