Mindfulness and Stress in The Elderly: Identifying Potential Mediators 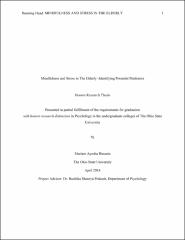