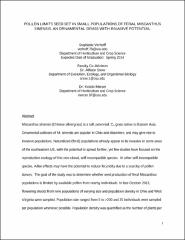 Miscanthus sinensis (Chinese silvergrass) is a tall, perennial, C4 grass native to Eastern Asia. Ornamental cultivars of M. sinensis are popular in Ohio and elsewhere, and may give rise to invasive populations. Naturalized (feral) populations already appear to be invasive in some areas of the southeastern US, with the potential to spread further, yet few studies have focused on the reproductive ecology of this non-clonal, self-incompatible species. In other self-incompatible species, Allee effects may have the potential to reduce fecundity due to a scarcity of pollen donors. The goal of the study was to determine whether seed production of feral Miscanthus populations is limited by available pollen from nearby individuals. In late October 2013, flowering shoots from nine populations of varying size and population density in Ohio and West Virginia were sampled. Population size ranged from 5 to >200 and 20 individuals were sampled per population whenever possible. Population density was quantified as the number of plants per square meter in smaller populations, and as the average distance to the nearest three conspecific plants for each sampled individual in larger populations. Flowering shoots were x-rayed at the OSU Ornamental Germplasm Center to determine percent seed set for 300 florets per plant. Results show an increase in percent seed set as population size increases. Intriguingly, a small feral population in Columbus may have received pollen from a large, adjacent stand of ornamental plants, based on its relatively high seed set. In four large populations, individuals were divided into “center” and “edge” plants based on their locations in the population. Percent seed set was greater in “center” plants versus “edge” plants, which were farther apart on average. Overall, the results suggest that pollen-limited seed set was common. This finding supports the hypothesis that rates of invasion of M. sinensis may go through an initial “lag phase” until sufficient pollen is available to allow substantial seed production in newly established populations.