Children and Adolescents’ Exposure to Secondhand Smoke in Ohio Households: Disparities and Trends 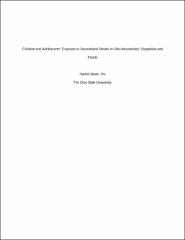