The Role of the Rbfox Proteins in Zebrafish Muscle Development 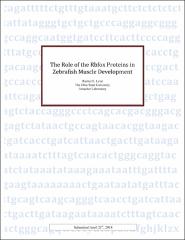 Tissue specific alternative splicing is essential to the proper function of genes in many pathways. Muscle development is largely affected by alternative splicing of muscle-specific exons. Defects in muscle-specific splicing events in animal models lead to severe phenotypes reminiscent of muscular dystrophies in humans. Our lab has previously shown that depletion of two zebrafish genes, rbfox1l and rbfox2, results in changes in muscle-specific alternative splicing patterns of target genes, in muscular structural defects, and paralysis of the embryos. To further characterize the Rbfox-regulated alternative splicing, I strove to generate null mutations for both rbfox genes. I pursued targeted mutagenesis using zinc finger nucleases (ZFNs), transcription activator-like effector nucleases (TALENs), and clustered regularly interspaced short palindromic repeats (CRISPRs). Both ZFNs and TALENs were relatively ineffective but CRISPRs showed potential to induce mutagenesis. To prioritize potential Rbfox-regulated exons, I screened a list of putative target exons that the lab had identified by RNA-seq as mis-regulated in the double rbfox1l, rbfox2 knockdown. Candidate exons were evaluated for the magnitude of the mis-regulation, the expression pattern of the gene, the function of the exon in the gene, and for Rbfox binding motifs in the adjacent intron. To date, my analysis has highlighted twelve exons, belonging to eleven genes, all of which showed both a significant depletion in the absence of the Rbfox proteins and a binding motif in the downstream intronic region.