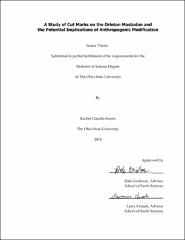 The Orleton Mastodon, of the species Mammut americanum, was excavated in 1949 in Madison County, Ohio and initial interpretations of the conspicuous markings on some bone elements was of the opinion that rodents had gnawed on the bones during times of drought when the skeleton was at least partially exposed above the pond it was deposited in. Recent discoveries of butchering sites of mastodons and similar Pleistocene megafauna have prompted the re-evaluation of several mastodon specimens for investigation of cut marks made by Paleo-Indians, as some specimens may have been passed over for consideration as they lacked lithic tools associated with the bones. Scanning electron microscopy (SEM) has gained widespread application in this pursuit, particularly when using casts of the cut marks being evaluated as fine-scale imaging can be achieved without destroying the original fossil material. The mastodon presented in this study underwent classical macroscopic and examination with a Leica microscope to obtain millimeter-scale surface detail of the markings in question. Comparisons of the marks on the Orleton Mastodon were made with those presented in other studies of known butchered mastodons and with other known processes that abrade, fracture, impact, and cut fossils, so that a possible mode of modification could be determined. Through careful examination, the Orleton Mastodon has been interpreted to possess no signs of Paleo-Indian modification, but possibly has tooth marks produced by rodents after the mastodon’s death. In addition to these alterations, the consistent orientation of these markings with the long axis of the bones prompts the possible explanation of some type of bone disease.