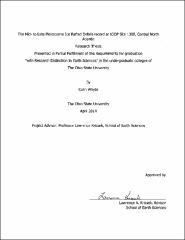 Eighty-seven samples from cores recovered at Integrated Ocean Drilling Program Site 1308 in the central North Atlantic Ocean have been studied to create a record of ice-rafted debris (IRD) abundance and composition downcore, which was used to produce an IRD record through time. These samples span 525 ka to 853 ka and the record was compared with known marine isotope stages to see if any relationship exists between global climate state and ice-rafting at Site 1308. The lithologies of the individual grains in the terrigenous fraction were identified to determine the abundance of each grain type relative to total IRD. Some grain types are source area-specific, so compositional changes indicate changes in the relative importance of the IRD sources through time. A count of 100 grains was made for each sample using a standardized counting technique and the grain types were identified and tallied. The percentages of terrigenous grains and biogenic grains were plotted vs. age as were the abundances of individual terrigenous grain types. The terrigenous fraction abundances show repeated fluctuations, with increases during the glacial marine isotope stages and near glacial-interglacial boundaries. The abundances of individual terrigenous grain types show similar increases during glacial stages and near glacial-interglacial boundaries, but none of the lithologic abundances follows exactly the same pattern as the total terrigenous fraction. Previous provenance studies determined that hematite-stained quartz, mafic rock fragments, and volcanic glass originated near the Gulf of St. Lawrence or southern Greenland, east central Greenland or Iceland, and Iceland, respectively. Variations in the abundances of these grains reveal frequent and often dramatic fluctuations in the relative rates of input from these IRD sources.