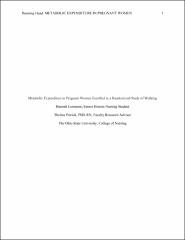 Preeclampsia is a disorder that occurs in 5-8% of pregnancies. What begins as elevated blood pressure and proteinuria can threaten the lives of both mother and fetus in the absence of treatment. Although the specific cause of preeclampsia is unknown, maternal risk factors for developing the condition include obesity, preexisting high blood pressure, diabetes, and endothelial dysfunction, among others (Preeclampsia Foundation, 2013). Interventions that decrease the incidence of preeclampsia and remain appropriate for the physiologic changes in pregnancy and the well-being of the fetus are needed. The purpose of this study was to assess the self-reported physical activity of pregnant women who enrolled in a randomized trial of a walking intervention. Women (n=123) who were enrolled in the study entitled “Exercise Intervention to Reduce Recurrent Preeclampsia” (R01 NR05375) had a history of preeclampsia, were sedentary, and were motivated to enter an intervention to reduce the likelihood of the recurrence of preeclampsia. Informed consent was administered and the participating women were randomized, resulting in 61 women in the attention control group and 62 women in the walking intervention group. Participants were 28.6 ± 5.25 (mean ± SD) years of age and were enrolled in the study at an average gestational age of 15.96 ± 3.02 weeks. The racial distribution of the sample was 19.5% African-American and 79.7% Caucasian. Participants completed the Paffenbarger Physical Activity Questionnaire at three time points during their pregnancy to assess activity. Data were calculated as metabolic equivalents (METs), an expression of energy expenditure. Although both study groups has similar METs per 24 hours at each measurement, participants in the walking intervention did reduce light activity and increase higher levels of activity as compared to women in the attention control group.