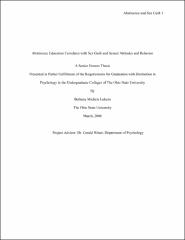 Sex education for children and teens is of great concern not only to parents and religious officials but also to national health advocates due to the high rate of unplanned pregnancy and sexually transmitted disease prevalence in this population. In the present study, formal and informal sex education including “safe sex”/ contraceptive teaching only, abstinence-only, and abstinence-plus “safe sex” education were examined to determine correlates with sex guilt and specific sexual attitudes and behaviors including communication with sexual partner(s), sexual satisfaction, and contraceptive use at present and at time of first intercourse. Retrospective questionnaires were given to 171 male and female participants and the participants were asked to reveal past and present sex education experiences, sexual activities and behaviors, and sexual attitudes. Familial and partner relationships as well as sex guilt were also examined. Abstinence education, a component of certain sex education programs that promote virginity until marriage but generally ignore the safety precautions of sexual relations if sexual activity begins prior to that time, positively correlated with overall sex guilt and communication with sexual partners about pregnancy and negatively correlated with contraceptive use communication with sexual partners about contraception. No correlations were found between sex education and sexual satisfaction.