The paleoecology of solitary rugose corals in the Portersville Shale (Pennsylvanian, Southeastern Ohio) 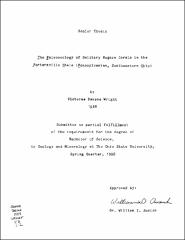 Very few studies have been completed on the paleoecology of Pennsylvanian faunas in southeastern Ohio. The Portersville Shale, outcropping in southeastern Ohio, is a highly fossiliferous Pennsylvanian unit. Within this fauna is the solitary rugose coral Lophophyllidium sp. These Pennsylvanian rugose corals from the Portersville Shale have very well preserved lateral attachment scars. Ordinarily, basal and lateral attachment scars suggest attachment only during the brephic stage of growth. In the specimens collected at the Muskingum-Guersney Countyline Quarry, studies of the attachment scars suggest post-brephic attachment. A study of the trophic position and life habits of the remaining faunal elements of the Portersville Shale has yielded evidence for a highly diverse community. The community was relatively stable, food resources were intermediate, and there was high space variance. In response to competition for food as well as the need for substratum stability, Lophophyllidium sp. developed a postbrephic mode of attachment to occupy a less competitive ecologic niche.