A qualitative analysis of acid mine drainage in watershed 29, of the Moxahala Creek and its tributaries, Perry County, Ohio 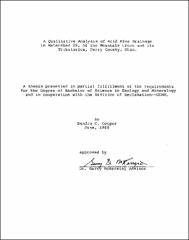 The lower Moxahala Creek watershed in Perry County has undergone surface and subsurface coal mining operations. The major coal seam mined in this area is the Middle Kittanning or no.6 coal. The high sulfur content (6.5%) of the coal, and the presence of pyrite and marcasite in the surrounding strata contribute to poor water quality discharging from mined areas. Three major contributors to acidic flow in this region are runoff from spoil banks containing large amounts of pyritic material, runoff from coal refuse piles left in final cut valleys, and seepage from final cut lakes through spoil banks, and into adjoining waterways. Controls suppress the oxidation process contributing to the acidity of the Moxahala basin. Thermodynamic controls favor the total elimination of oxygen from the reaction site, returning it to a reducing environment. Kinetic controls repress the catalyst causing rapid oxidation of ferrous iron by introducing bactericide agents into the mine before the water escapes.