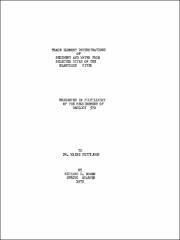 The results of the water samples collected from the Blanchard River revealed a raw water supply that has concentrations far below the standards set by the USPHS for finished water sources. The sediments from the Blanchard River Showed significant quantities of trace elements, particularly mercury and zinc. The highest concentrations of mercury were found in areas where intensive spraying had taken place. Lead seemed to accumulate in areas adjacent to heavily travelled roads. Geological contamination was also suspected as a prime contributor of copper, zinc, and lead. Although no definite answers were reached by this investigation, the results conspicuously pointed out the extremely varied and complicated behavior patterns of trace elements in the environment. The accumulation of the trace elements in the river sediments although not posing a health hazard at the present time, could possibly be released into the water through some change in the Blanchard River's many chemical equilibrium systems involving plants, organisms, dissolved oxygen, sunlight, pH, and hardness. The essence of studies such as this is to give health authorities essential information in establishing realistic limits of trace elements in our drinking water.