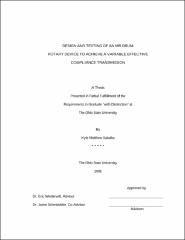 The goal of this work was to compliment previous research that had been conducted to validate the concept of achieving a variable compliance transmission using a parallel combination of a magnetorheological (MR) fluid damper and a compliant element, together acting in series with an actuator. Two primary benefits of realizing such a system are identified: 1) the potential to achieve safer human-robot interactions while maintaining precise position control, and 2) the potential to produce a multi-pedal robot capable of achieving efficient locomotion at various speeds. A prototype transmission was previously built and tested to demonstrate such benefits. Backlash in the prototype system proved to be problematic in conclusively demonstrating the potential benefits of using an MR rotary device to achieve an effectively compliant transmission. Specifically, position profiles were performed during which an end-effector was accelerated from rest to constant velocity, and then decelerated back to rest. The system demonstrated precise position control during every phase of the motion (e.g. acceleration, constant velocity, and deceleration) but never all in a single test. Depending on how the starting position of the damper body was chosen with respect to the backlash in the system, the body would inevitably rotate significantly relative to the shaft (input) during either the acceleration or deceleration phase, causing position error. Therefore, it was necessary to design, build, and test a new MR rotary device, free of backlash to show that precise positioning could indeed be accomplished. A new MR rotary device was designed and implemented into the previous system. Tests similar to those conducted with the previous MR device were performed to so that the new system could be compared to the former. Most importantly, the new system was able demonstrate precise position control throughout every phase of a motion profile during a single test. The position error was limited to 0.02 degrees of relative rotation between the damper body and shaft during a single trajectory. The results complimented those of the original prototype to conclusively demonstrate the potential benefits of using an MR rotary device to achieve a variable compliance transmission, especially for the case of achieving precise positioning during high magnitude acceleration and deceleration phases. Advisor: Eric Westervelt