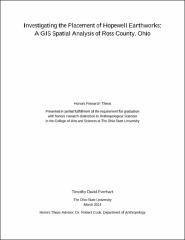 This honors thesis concerns the placement of the large, often geometric earthworks constructed by the Ohio Hopewell Culture (approximately A.D. 1- 400) within the major river valleys of Ross County, Ohio. Least-cost spatial analysis shows that these earthworks are not placed within the closes proximity to the hypothetical easiest routes of travel. Analysis of spatiality, using both Euclidian and Manhattan distances, shows that earthworks were not optimally placed with regard to space. Analysis of environmental factors shows that, while glacial and pre-glacial parent materials and aspect were not chosen for, it does appear that areas with elevations between 639 to 708 feet above sea level, slopes of less than 6 percent, and Eldean loam soils were specifically targeted for the construction of earthworks. While the logic of selecting sites at specific elevations and minimal slope are expected, the selection of Eldean Loam supports a possible explanation that Ohio Hopewell people chose sites that would resist both erosion and the growth of smaller plant life.