Postcolonial Theory, Dialect, and Sociolinguistics in the Fictional Worlds of Burgess and Orwell 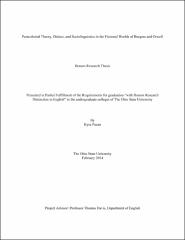 In the second half of the twenty-first century, the advent of postmodernism allowed authors more freedom to break literary norms and traditions, and for example, to write in dialects both invented and real. Much of this dialect literature emerged out of the experience of decolonization and is concerned with questions of nationality, linguistic identity, race, and empire. Critics have analyzed this dialect literature as part of the greater tradition of postcolonial literature and have largely ignored the significance of dialect outside of a postcolonial context. How then are we to interpret dialect literature that did not emerge from the postcolonial condition? Two such works are Anthony Burgess’ novella A Clockwork Orange and George Orwell’s 1984. These texts use nonstandard Englishes, or dialects, that do not represent language or culture present in the real world. Postcolonial theory fails to account for the function and significance of dialect in these works. I propose that the use of dialect in non-postcolonial literature may serve as a marker of identity and a means of illuminating social and political themes, but also allows characters to distance themselves from the horrific experiences they encounter and symbolizes violence within the texts.