Impact of Religious Affiliation on Economic Growth in Sub-Saharan Africa 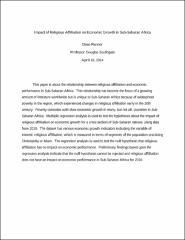