From "Red Rising" to "One Goal": A Case Study of the Chicago Blackhawks' Organizational Resurgence from 2007-2009 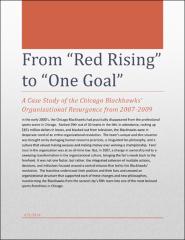 In the early 2000’s, the Chicago Blackhawks had practically disappeared from the professional sports scene in Chicago. Ranked 29th out of 30 teams in the NHL in attendance, racking up $191 million dollars in losses, and blacked out from television, the Blackhawks were in desperate need of an entire organizational revolution. The team’s unique and dire situation was brought on by damaging human resource practices, a misguided fan philosophy, and a culture that valued making excuses and making money over winning a championship. Fans’ trust in the organization was at an all-time low. But, in 2007, a change in ownership led to a sweeping transformation in the organizational culture, bringing the fan’s needs back to the forefront. It was not one factor, but rather, the integrated cohesion of multiple actions, decisions, and initiatives focused around a central mission that led to the Blackhawks’ revolution. The franchise understood their position and their fans and created an organizational structure that supported each of these changes and new philosophies, transforming the Blackhawks from the second city’s fifth team into one of the most beloved sports franchises in Chicago.