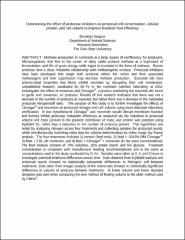 ABSTRACT: Methane production in ruminants is a large source of inefficiency for producers. Microorganisms that live in the rumen of dairy cattle produce methane as a byproduct of fermentation, and 6% of gross energy cattle ingest is eructated in the form of methane. Rumen protozoa have a close metabolic relationship with methanogenic archaea. Protozoal inhibitors have been developed that target both protozoa within the rumen and their associated methanogens and their suppression may decrease methane production. Essential oils have antimicrobial properties that likely inhibit microbes by disrupting their cell membranes. Unpublished research, conducted by D.Ye in the ruminant nutrition laboratory at OSU, investigated the effect of monensin and Cinnagar®, a product combining the essential oils found in garlic and cinnamon, on protozoa. Results of this research indicated that there was not a decrease in the number of protozoa as expected, but rather there was a decrease in the calculated protozoal nitrogen/cell ratio. The purpose of this study is to further investigate the effects of Cinnagar® and monensin on protozoal nitrogen and cell volume using more elaborate laboratory verification. It was hypothesized Cinnagar® and monensin would disrupt membrane function and thereby inhibit protozoal metabolic efficiency as measured via the reduction in protozoal volume and mass (protein is the greatest contributor of mass, and protein was assessed using Kjeldahl N), rather than a reduction in the number of protozoa present. This hypothesis was tested by analyzing nitrogen across four treatments and collecting samples for protozoal counts, while simultaneously recording video data for volume determination by video image (by frame) analysis. The four treatments included 1) control (feed only), 2) feed + .0043% DM Cinnagar®, 3) feed + 2.82 μM monensin, and 4) feed + Cinnagar® + monensin (in the same concentrations). The feed mixture consists of 70% cellulose, 25% potato starch, and 5% glucose. Treatment concentration is consistent with manufacturer feeding recommendations and is the same as concentrations used in the study conducted by Dr.Ye. Samples were taken at 0, 3, and 6 hours to investigate potential treatment differences across time. Data obtained from Kjeldahl analysis and protozoal counts showed no statistically substantial differences in Nitrogen/ cell between treatments. Data taken from ImageJ analysis of the videos also showed no statistically significant differences in volume of protozoa between treatments. A lower volume and lower standard deviation was seen when comparing the new method of finding volume to the older method used by Clarke.