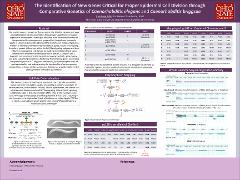 The evolutionary conservation of genes within the EGF/Ras signaling pathway among biological systems exemplifies the pathway’s significance in proper organismal development. Even slight deviation from the normal function of oncogenes and tumor suppressor genes within the pathway commonly results in abnormal cell proliferation and the formation of malignant growths. In order to identify and better understand these genes, we are continuing to investigate the role of genetic differences within the EGF/Ras signaling pathway and their influence on epidermal cell division by studying the relationship of vulva development between the nematode worm species, C. elegans and C. briggsae. A genetic screen conducted in both species has allowed us to identify 4 novel genes that are specific to C. briggsae and are capable of mutating to a multivulval phenotype, characterized by excessive epidermal cell division. These data suggest that the underlying network between the two species is evidently different, addressing the topic of species variability. We have been able to map each of these mutations to specific regions of chromosomes, which has allowed us to sequence various candidate genes. Using this method we have identified one of the genes as cbr-lin-1. Another candidate has undergone a whole genome sequence based off of its perspective map data. Whole genome sequencing has supplied us with 5 hits, of which we have been able to narrow down to 2. Further research utilizing similar mapping methods, gene cloning, and gene sequencing will allow us to identify the remaining genes responsible for vulva growth in C. briggsae, as well as several suppressor genes throughout the pathway- starting with the sequencing of let-23, the pathway’s receptor. Additionally, by addressing the topic of species variability and understanding the functionality of various genetic compositions between similar species, our findings can provide insight for the development of tailored drug therapies.