Methods of Detecting Ketosis in Jersey and Holstein Herds 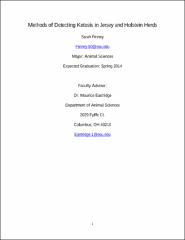 The purpose of this study was to compare different methods of detecting ketosis in dairy herds. Data from two separate studies were used; one study included a commercial Holstein herd and the other a Jersey herd owned by the University. Methods used to detect ketosis at 7 to 14 days in milk were Ketostix (Bayer Corporation, Leverkusen, Germany) for urine, milk fat from right fore-quarter strippings measured using a Lacticheck (Page & Pedersen, International, Ltd., Hopkinton, MA) instrument, and blood beta-hydroxybutyrate (BHBA) concentrations. Data from 30 Jersey and 55 Holstein cows were analyzed using SAS. Average values for the Jersey herd were 11.4 mg/dL, 17.6 mg/dL, and 1.85% for urine ketones, blood BHBA, and milk fat, respectively. Urine, BHBA, and milk fat for Holstein cows were 3.36 mg/dL, 11.6 mg/dL, and 2.57%, respectively. For both herds, the BHBA and urine tests had the highest correlations; 0.44 with P < 0.05 for Jersey and 0.38 with P < 0.01 for Holstein. Jersey had the least correlation (0.07) between milk fat and BHBA with P = 0.74, while Holstein milk fat and BHBA had a correlation of 0.13 with P = 0.39. Milk fat concentrations in our study were not correlated to urine and blood ketones as has been reported in some other studies, possibly because fewer cows were used in our study. Both blood and urine ketones are effective measures for detection of sub-clinical and clinical ketosis.