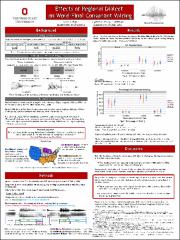 In English word-final consonants, the voicing feature is signaled by temporal cues, including the duration of the preceding vowel and the consonant itself (House, 1961; Klatt, 1976) and by non-temporal cues, including voicing during the consonant (Fowler, 1991). Purnell et al.'s (2012) research found that regional dialects of English vary in how they signal word-final consonant voicing. The goal of this study is to examine the use of temporal and non-temporal cues to phonological voicing as a function of regional American English dialect and consonant type. Monosyllabic words ending in either a stop (e.g. p, t, k, b, d, g) or a fricative (e.g. s, z) were selected from interview speech produced by five male and five female speakers each from the Northern, Southern, and Western dialects of American English. For each token, the vowel to consonant duration ratio (V/C duration ratio) and the percentage of voicing during the word-final consonant were measured. Results for the non-temporal cue data showed that the contrast between voiced and voiceless consonants was maintained across consonant types and dialects. The Southern talkers appeared to have a smaller contrast though for consonants followed by silences or phonetically voiceless sounds. Results for the temporal cue data showed that the contrast between voiced and voiceless consonants was also maintained across consonant types and dialects. The Northern talkers had a smaller contrast for fricatives than other dialects. These results confirm previous results about contrasts being maintained but also suggest that there is some dialectal variation in the extent to which these contrasts are maintained across consonant types.