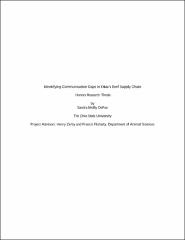 Ohio has a unique infrastructure: a large urban-rural interface, active beef industry, and several small meat processing facilities, which provide opportunities for food animal producers to engage in value-added marketing strategies. Information regarding where discrepancies lie between the various links of the beef production chain and market drivers of locally produced beef will help producers and processors make more informed decisions on production and marketing strategies and thus, enhance their economic sustainability and success. Producers, especially, could benefit from increased revenues, which may help Ohio retain its number of small family farms. A series of surveys conducted in association with previous market research projects and feasibility studies in Ohio were used to compare responses regarding market drivers and perceived priorities of beef characteristics that were important to consumers by each of the various segments of the supply chain (consumer – processor – producer). Similar questions were identified among the surveys and were evaluated to recognize trends among responses. In regard to the attributes consumers find most important in beef purchases, processor awareness was hypothesized to be greater than producer awareness due to closer proximity to the consumer in the production chain. Results indicate that consumers rank freshness as the greatest priority in making purchasing decisions of locally produced beef while processors and producers ranked taste as the greatest priority. Across all three groups, tenderness and price ranked second and third, respectively. This study indicates that Ohio producers and processors have a different perception of important features for locally produced beef than consumers. Thus, there is opportunity to realign and improve awareness of Ohio consumers' primary focus areas concerning beef products, as well as the potential to adjust marketing strategies to improve sales for locally produced beef in Ohio.