The Amish—A People of Preservation and Profitability: A Look at the Amish Industry in Lancaster County, Pennsylvania 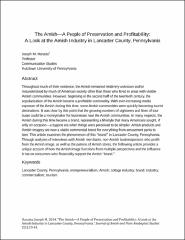 Throughout much of their existence, the Amish remained relatively unknown and/or misunderstood by much of American society other than those who lived in areas with visible Amish communities. However, beginning in the second half of the twentieth century, the popularization of the Amish became a profitable commodity. With ever-increasing media exposure of the Amish during this time, some Amish communities were quickly becoming tourist destinations. It was clear by this point that the growing numbers of sightseers and lines of tour buses could be a moneymaker for businesses near the Amish communities. In many respects, the Amish during this time became a brand, representing a lifestyle that many Americans sought, if only on occasion—a bygone era when things were perceived to be simpler. Amish products and Amish imagery are now a viable commercial brand for everything from amusement parks to beer. This article examines the phenomenon of this “brand” in Lancaster County, Pennsylvania. Through analyses of interviews with Amish merchants, non-Amish businesspersons who profit from the Amish image, as well as the patrons of Amish stores, the following article provides a unique account of how the Amish image functions from multiple perspectives and the influence it has on consumers who financially support the Amish “brand.”